Sometimes a world grows at as specific speed, and other times it grows in mass bursts of creativity. I’ve recently finished working on the initial lore of the Gwagaruh, and now I’ve started slowly working on the Arashii. I am going to be frank, the Arashii were not originally meant to be in this story. The evolved out of my mind as I was working on the history o f the world, and then started carving up the base lore for the Society’s Order. It was around the time I was posting pins on pinterest to inspired my writing, that I kept laying around with an idea i”ve had for a while. A species that reproduces by using the bodies of the dead.

From the Dead there is Rebirth

The idea of having a race ethat uses the bodies of the dead to create life is not something new. Undead races have been somewhat popular for years with the infamous vampire being one of the more interest ones. The inspiration behind the Arashii however was not really your typical undead, but more in-line with what we might call a Frankstein monster. An individual stitched together from other pieces to form a complete sapient. In this case this is done with advanced cybernetics, and a strange alchemical liquid known as Black Ichor. 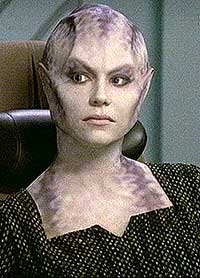 It was ST:Voyager episode “Ashes to Ashes” that really pushed my interest in this form of reproduction. Lindsey Ballard suddenly returns after a period after her death. The crew of Voyager attempts to adapt, and so does Lindsey, but in the end she returns with her “Kobali” (the reso-aliens) family.

Races derive from the Main Line

Much like the recently completed Gwagaruh, the Arashii cannot reproduce without the Faeru. It is through Faerin dead that the Arashii find bodies. It is through Faerin support that the Cabals, and Sanctums can find respite. Strange and cliche enough, it was a House utterly obsessed with eternal life that led t o the creation of the Arashii. YEars later, and after the fall of the Knights IMperial it is they who currently act as primariy scholars through the Triad. They are not the most agreeable species out there, but there is one uniting factor for them all. Its the Gwagaruh.

You see one of the subspecies of Arashii, the Ayar, they’re homeworld was destroyed by Gwargs. It was they who founded the Reiver’s Guild, and it is they who constantly seek out the Gwagaruh in their hiding places.  So outright racial dynamics are already in place. Much like their “Parent Race”, the Faeru, the child races are usually not always getting along.  This shows how the legacy of one Race then influences another. No matter how hard the Soulgiven, the Arashii, or perhaps even the mysterious Helogav try, they will never escape the history of the Avalon Cluster.

ALl derive, and all races in some way are born of the achievements, or the failures of those who call themselves the fated ones.

The Bigness of the world in comes about from the network of story connections between the races. As each race has a grounded reason  or purpose for existing its not much different from the old addage about superheros from comics. That being that a hero often creates their own worst enemies through best intentions. The different Faerin ethnic groups have history, and modern political leanings that shape their destinies Language will also influence how things work on the Interstellar stage.