On a similar note I must confess to you, I’m giving very serious thought… to eating your wife.

What defines evil? Is it that sadistic love of eating someone? Or is it the questionable ethics of the businessman. Last week I discussed Ethics and different layers of morality. The very notion of evil is questionable and who or what is evil even more so. However, in a plot one needs a foil, and its a good idea to give a villain a reason to be hated. However, this easily leads to many problems. People misappropriate the term ‘psychopath’ or ‘sociopath’, terms that at time can easily lead to problematic portrayals of villains always being unhinged, crazy, or over violent. Let us be honest, there is no problem with a villain who is a sadist, or who is violent. The problem comes from using a stereotype that consistently displays the mentally ill as being unsafe or as uncontrollably unstable.

The very concept of evil hence needs to be nuanced and considered. Sure, you can create a mustache twirling bad guy just as much as the rampaging city smasher. But the best and most memorable villains have considerable amount of thought and layers put into their existence. You need to make them somewhat likeable so that people can either hate them for who they are rather than for what they do simply because they are “Evil” (Every villains is lemons). Villains can just be megalomaniacs, they can be mysterious, but at the end of the day the foil needs to provide a conflict for the protagonist to resolve. 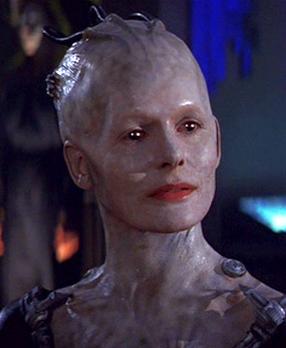 We won’t turn you into a drone. You’re much too valuable to us with your individuality intact. But you’ve left humanity behind. Try to abandon their petty emotions as well. Fear… anger… vanity… They’ve corrupted you. But the damage can be repaired.

I previously discussed notions of grey and black morality. The notion that there is a morally neutral consideration of what is right or wrong. Game of Thrones has this in spades, so does modern series such as ‘The 100’. These shows are outright loved because they have variable levels of what is good or bad. Most of the antagonists in this regard are represented by unwavering forces that see their plight as the only good one. Stannis and his desire to be King, and Cersei with her defense of family.

At the end of the day though even with morally objective actions, there are still instances where a clear almost inhuman evil is needed. For Lord of the Rings this was Sauron and his desire to conquer the world. The Borg simply wish to devour all technology in their  neverending quest for perfection. An offset being that they care little for individual freedom or the right for other species to exist. Each of these enemy groups provides an almost elemental force behind their desires. One cannot simply over turn the others, just as much as no one can easily just slay an entire Army of Orcs. These are stories that place tension on a high pedestal and then elevate the actions of the protagnists into legend.

Creating Antagonism that is Memorable

One reason people remember the White Walkers is their frightening ability to raise the dead. The Goa’uld of Stargate were alien parasites that played at god. The Borg were almost unstoppable force which could adapt to any defensive measure, and turned their victims into mindless machines. Its this dance along the uncanny valley that ingrigues us, frightens us, and creates a challenge to be overcome. In a wo rld without clear evil, the themes have to meld in such a way to provide obstacles. That can be the political machine or the threat of war.

But, if there is anything that a sense of Clear Evil needs is that it needs to be memorable. In Horrors its how we react to hearing the “sshh shhh aahhh aahhh” signalling Jason’s arrival. Its Kilgrave’s subtle grin, or the way the Joker never ever cares about his victims. Villains and the actions they propagate need to remain with the reader and the audience providing a long term reminder of the challenges the protagnoist feels.