Did you grow up on Indian Jones like me and love the focus of adventuring in a period just after the Second World War? Do you love the retro-grunge combustion engine fueled dream of fallout and remember age old disney shows about “the future”? Look no further Wyrdkin, we’re going to talk about Diesel Punk! Like all other “Punk-Punk” subgerenes, Diesel punk takes the idea of its beloved technology and takes it way past eleven. Like gas or diesel engine technology from the 1920s to 1950s? Do you love chrome and retro-smooth designed technology? Yes, then you are likely a Diesel Punk mech-monkey at heart!

Diesel Punk at its heart is a story where grime and chrome go hand-in-hand. Sometimes this can mean a neutral hero going up against the undefeatable threat that might destroy the world or at least cause serious damage. A lot like Steampunk, Diesel is heavily embedded in its aesthetics and the images that spring to mind when people think of Film Noir, Radio Dramas and good old fashioned later era adventure pulp novels. Really it continues the romanticism of technology but drops the more romantic notions of culture along with it found in Steampunk. Part of the way through it decided to ingest the dirty rebellion and mechanization of Cyberpunk.

Diesel Punk in many cases is not just about the technology of the period, but the ideas that sprung forth from it. The World Wars were vast conflicts (a given) and injected the feeling of size into a world which may not have felt it before. Airships, airplanes and things in the sky are “kind of a thing” for diesel punk along with a love for early aviation art and especially anything art deco really. The the key here are smooth lines that speak of the “future” and yet seem righteously retro when viewed in the long term. If you want a good example of what Diesel Punk can think of Bioshock and especially the city of Rapture. Flapper and the roaring twenties along with the thirties to some appear to be major inspirations for elements of the famous game. 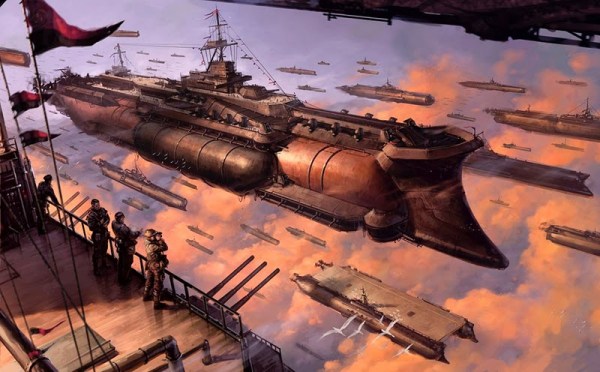 Diesel punk embraces the mechanized industry of its period and justs loves it. Jazz, speak easies, and even earl rock are all at home in a diesel punk story. While the world itself might feel ‘neutral’ or ‘vast’ there is going to be a sense of ongoing progress and the march of a better world. The interwar periods after both World Wars were often filled with a sense of expansion and wonder.

One especially awesome think about Diesel Punk much like other punks of its time is that it exists in a post-period look for its inspiration. In Diesel Punk stories multiple strong voices can come to the fray which can excuse colonial outlooks and sexist gaze. Rosie the Riveteer heroines are something easily done in a world brimming with the cooperative feeling taken from fighting against the axis powers.

I’ve mentioned multiple times of how this form of punk embellishes the retro forms of technology often seen from early scifi of the 1950s. This can be taken even further with the introduction of Raygun Gothic aesthetics into the mix. Early series such as Flash Gordon often are inspirations for the later designs for Diesel Punk series. They continue with the idea of art deco smooth curved lines. Rather than being a hard scifi though, these elements of Diesel Punk is more often a stylized science fantasy than fiction. Speculation of where tech can go and how far it can evolve are only limited by it being either a combustion engine or electric in nature.