“Cry havoc, and unleash the dogs of war.”

Modern warfare is quick lightning fast and filled with digital advancements. The early days of gunpowder are considered by some to be a time of romanticized charges, great last stands, and questionable campaigns. When we think of this period we think of Napoleon; the Thirty Years War or the the colonization of the west (and the ensuing ethnocide against the first nations). From all of these memories and thoughts, we draw a new kind of fantasy, one that sits past the early time of gunpowder seen in the Renaissance to the later war-torn periods of the Wars of Religion.

Gunpowder fantasy is truly the over-term for a series of smaller subgenres such as “Weird West” and “Flintlock” fantasy. Both of which use specific tropes to drive home the stories they tell. Two well-established series in the genre include the Powder Mages trilogy by Brian McClellan and the Lightbringer series by Brent Weeks. In both series, gunpowder technology works alongside or has is part of the magic in some way. For the Lightbringer, novels powder is used in the form of pistols and rifles as well as flares to fight off enemy magic users. The world itself is a constantly shifting political landscape with several nations vying for power and multiple secret societies with their own agendas.

The said can be said for Powder Mages which like the Shadow Campaigns series (by Django Wexler) thrives on the classic Napoleonic rush of Great Man history along with the bloody downfall of abusive monarchs. In the case of Powder Mages, the mages themselves are able to manipulate the velocity of bullets and even become stronger by consuming gunpowder itself. Flintlock Fantasy is a genre that loves to wiggle steadily between the established High Fantasy love of powerful magic users, and the even more pervasive notion that gods are nothing more than said powerful magic users. This is certainly the case in both the all three mention series. The “Gods” themselves were not in fact “immortals” are nothing more than individuals who have either utilized powerful artifacts to gain their ability (as seen in Lightbringer or Powder Mages) versus those who gain it through being possessed by demonic entities (Shadow Campaigns).

The magic in these worlds often enough is usually either a low controlled form of magic bordering on horrific such as the various “Damned Penitents” of Shadow Campaigns. Or they are simply a powerful elite like the Privileged who often see new forms of magic like the Powder Mages as threats to their very existence. These series thus are generally “Middle to High” fantasy in how they present magic. It is either very potent and hidden or is openly available, but to a select few. Still, the result is a devastating series of abilities which can easily change the tide of war. 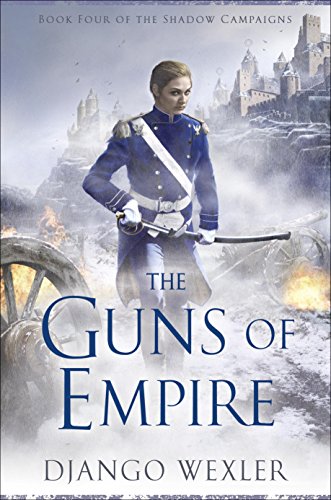 Great Man Versus the Ranker

Most novels in this regard are either going to be a series drawn from the viewpoint of a few key leading officers or the rank and file unit leaders themselves. This gives a -very- different viewpoint for the novel. When either the Field Marshal from Powder Mages or the Black Prism of Lightbringer fight it is usually a focus on their ordeal. They lead the fight and do their best keep everyone alive. Often the soldiers can be faceless with some named individuals dying at a regular pace to impart the horrors of war. Compare this to the viewpoint of a unite office such as Commander Ihernglass in Shadow Campaigns we see multiple friends die throughout the long slog of war.

Writers for Gunpowder usually mix and match the series. Giving a sense of how the Commanders lead and prepare their soldiers and then switch to the point of view of said Soldiers. There is also a great deal of consideration place into strategy and the kinds of weapon or kit an enemy might bring into battle. This is not a time of charging knights but the fantastic attack of cuirassiers. The grand explosion caused by mortar fire and in many cases, the personalities themselves in the battle tend to have a thematic characteristic to their given “specialty” in war.