“Mm. I was always more comfortable around numbers than people. I could control numbers. “

The Swede, Hell on Wheels

If Dreadpunk had a western cousin then it would be the Weird West, a fantasy driven genre which takes the American romanticized Wild West and injects all the beloved mythology often attached to it. The unknown aspects of the Frontier born in the early Expansion and Manifest Destiny eras of history gave rise to an assortment of tales and legend which propagated across the west. New shows such as Wynonna Earp feed off this notion of demons, magick, and scary ghosts that dwell in the places where the wild still calls home. Mix this with the steady twang of classic western music and you get wonderful tales of Ghost Riders driving the devils heard and much much more to set the stage.

At its core is the notion that horror we often envision in stories such as the old Gothic tales of Edgar Allen Poe, and the terrors of Pulp Fiction are unleashed into the windswept plains of the Wild West. Terrors that lurk in the dark of the unknown and the foreign come alive. The only law that exists is the is the half-hearted reach of the far away capital on the coast or the south of the border. Otherwise, the shotgun rules and the best way to solve a problem is with a barrel full of lead.

Problems on the Open Range

“The man in Black fled across the Desert, and the Gunslinger followed.” 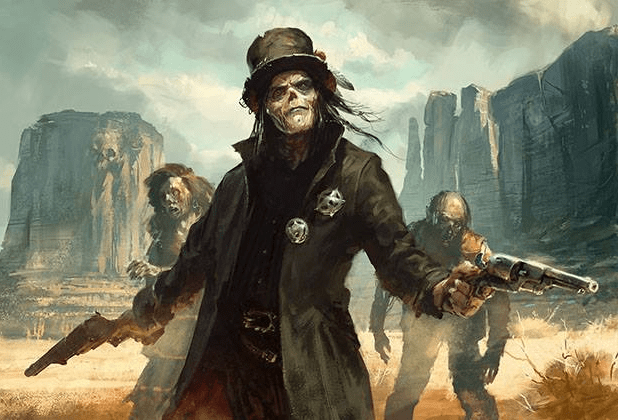 Whereas Gunpowder Fantasy revels in the historical notions of early Gunpowder and Flintlock War the gun is merely one of many weapons utilized out on the trail when it comes to the weird west. Magical Native American cliches are often abound along with tales of cryptids often related to them or created by them. This is world that is often more than not often fighting back against the settlement of it. The Weird west at times melds the worst of the colonial view and orientalism to create the monsters it so loves. Chinese magicians and Native American Shamans in can easily become abused as a means of introducing the fantasy element that a writer so wants. Historically this ignores the richness of independent culture and maligns the treatment immigrant and displaced peoples had at the hand of settlers.

As Bohannon states in Hell on Wheels:

“There won’t be a trial. That’d be a waste of time. And they wouldn’t be convicted, ’cause the only witnesses is you and Tao. And Chinamen ain’t allowed to testify against white men under California law. “

This is where the nitty gritty of tall tales can easily give way to a diverse world ripe with different factions and peoples. In Wynonna Earp (a modern Weird West tale) the titular character teams with a “Black Badge” unit to deal with demonic incursions to her home town. The show includes among other things openly gay pairings, two established men of color and includes several redeemable villains. All of which is built on the historical tall tale of Wyatt Earp and his famous best friend, Doc Holliday.

What a Bunch of Varmints

Part of the fun of the west was it was a time of chaos and only good solid work resolved itself into good acts. A classic Kingdom story alight with opportunities for n’er-do’wells to solve the issues of the day. Or stop a complete evil because if the world dies all those idiots in it including ourselves die along with it. This is a key tenet of why audiences love team stories such as Firefly or Guardians of the Galaxy. We love stories about misfits and no matter how you spin it one of the charms of the old West was it being a land for misfits. Have troubles during the Civil War, flee out west and work the railroad? Need to escape problems in the east? Go west young lad!

What these misfits and the good folk of the west have to face is the final nail in the coffin to explaining the Weirdness in the west. Magic itself while prevalent is often hidden or is only considered ‘a folk tale’. People might fear the curse of the old mine, but they don’t really believe it exists. Then there are the Faustian deals (not at all unlike Dreadpunk) and the monsters who lurk in the darkness just beyond the light of the fire.